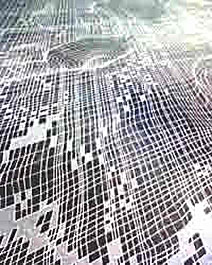 In the context of Peripherie 3000, MeX is organising a performance evening on April 22 – 23, 2006 with a dance solo by k. o. and with the trio of experimental music Pajo & Labosh & Kovac.

At present the most interesting dance formation in Zagreb is the trio k . o. (kombinirane operacije / combined operations), which was founded in 1998 by Sasa Bozic, Zeljka Sancanin and Andrej Vucenovic. The first works of the group (49 years, Kafka gegen Pound) were conceptually founded on the confrontation of different cultural and ideological legacies of the k. o. members in politically unstable time and space. Now (for example in Places Where.. ) they are researching the pure physicality and phenomenology of movement and are radicalizing the visualization of the performed material.

In Dortmund the choreographical essay »Solo: Cycle / 1 / Project On Labour« shall be performed, which questions the normative ideology of choreographical practices, and instead makes the dance medium »tangible«. It emphasizes the perceptive visibility and the semiotic elusiveness as principals. With minimalistic precision, the performer Zeljka Sancanin investigates the (in)visibility of her choreographical material; she manipulates with the sense of producing the dance material in the very moment of performing it. The landscape of choreography is deliberately sculptural, affirming Roland Barthes’ idea of the punctum : a detail that escapes every rationalisation. Through constant, exuberant growth of the choreographic material, the performance moves away from any concrete meaning, exposing the tension of the perceptive process of the recipient.

The three Zagreb artists create with their live performances a dense conglomerate of sounds. The music of the trio assembles itself from acoustic »incidentals«: Interferences are consistently and skillfully interwoven with one another. There are no melodies in the literal sense, but occasionally the listener is distracted by »proper« folk-music, which is brought in live by record. However within the shortest time the folk music is deconstructed manually and alienated digitally. Nevertheless do also longer passages have a groove, for which the DJ Labosh is the main responsible. As on his last solo album „Method of Dehumanisation“ based on the tradition of European »turntablism« he uses the ends of the cut of every vinyl disc as the basic unit of electronic music. Those tecnically necessary grooves do not contain any music and are excluded from the copyright. This infinite fundus of short snippets as a contribution of the celebrated DJ Labosh leads one to the question of the most beautiful cracking of a record. The trio works also with feedbacks and distortions, which however do not provoke as an expressive or aggressive gesture, but open up the listening with differentiated sounds

Viseslav Labosh (b. 1978 in Zagreb) started to dj in 1997 and began to focus on electronic music in 1998. He is a member of the Breakalicious crew and Egoboo.bits; he performed a.o. in Ljubljana, Graz, Zurich und Naples. In mi2 Labosh realised the first dj workshop in Croatia and co-organised the first Creative Common-Festival in the world „Freedom of Creativity“.

Dragan Pajic Pajo (b. 1956 in Zagreb) plays the electronic guitare since 1972 – solo and in many different groups such as Leteci Cirkus, Bordel, Cul-de-sac, Accelerated Evolution Orchestra a.o. He works as a composer and musician for several contemporary theatre- and dance projects as well as a film composer. Pajo is active both in Zagreb and in the impro scene of Amsterdam and has published numerous CDs.

Mario Kovac (b. 1975 in Zagreb) works as an actor, composer, screen writer and organiser, but mostly as a theatre director. He is part of the SCHMRTZ THEATER, which was founded in 1995 and which became known quite fast through their aggressive and often scandaleous performances. His recent activities are focused on the groups Tena Novak and Dada Jihad where he plays keyboards, teramin and different electronic devices.